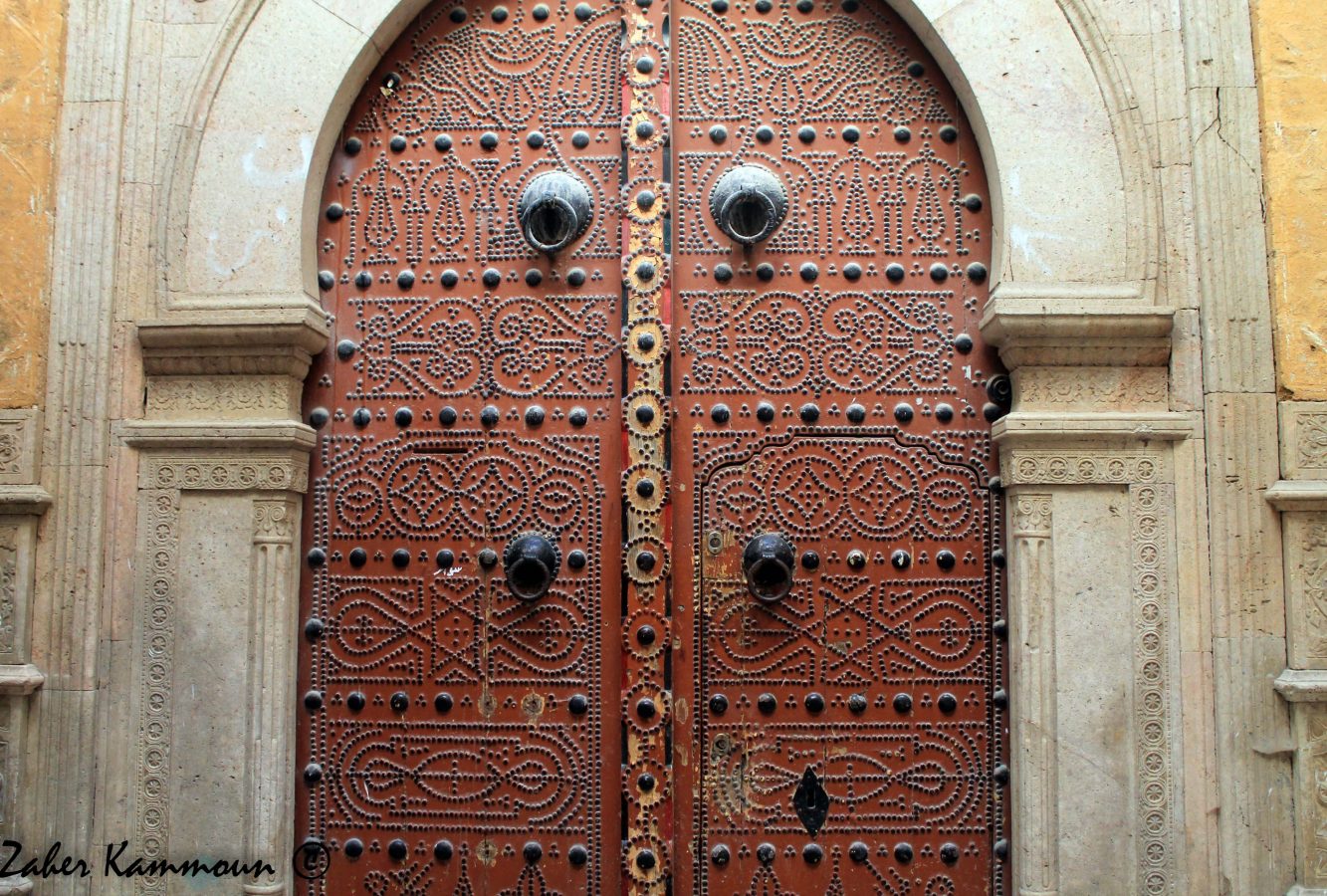 Our dynamic guide will show you what travel books can never reveal: the authentic life in Tunis.

Travel in the comfort of our luxury coach to discover the narrow streets, the romantic little streets of the French city and all the sites and monuments of Tunis.

Discover the complex and unique balance between the ancient and the modern, the spiritual and the secular, the local and the international.  Contrast that defines the city of Tunis today.

Our new urban tour will take us this time in the western part of the medina of Tunis. It is a stroll in the medina and the discovery of its treasures often hidden and little known.

The departure will be made from the Kasbah square, at the top of the medina by walking around the streets of Sidi Ben Arous and the Pasha until Bab Souika.

-Duration: about 4 hours, depending on the time spent in the monuments or in the cafes. You can also stop in one of the countless gargotes for lunch. Non-stop, it is less than an hour's walk.

-Technicality: the paving stones are not necessarily leveled, prefer a good pair of tennis shoes rather than high heels.

The start of the hike is at the Kasbah square. It is an unavoidable place, which groups together several ministries including the 1st ministry on the right as you go down. It is the Dar el Bey, former palace of the government of the Beys founded in the seventeenth century. Unfortunately, it cannot be visited.

Going down the square, raise your head. You will see above the Ministry of Finance, on the left, a rather peculiar sun clock. Admire also the very beautiful gallery along this Ministry.

Then take Dar el Jeld street on the left at the bottom of the square. This street has one of the best addresses in Tunis if you want to discover the traditional Tunisian cuisine in a period bourgeois house: the restaurant Dar el Jeld, former house Dar Khalsi. We advise you to come back there in the evening for example; it is better to reserve your table. Dar Khalsi dates back to the seventeenth century during the Mouradite period.

Opposite, an annex of the restaurant allows you to discover another bourgeois house dating from the early twentieth century: the Diwan. These visits allow you to understand the design and layout of traditional Tunisian houses. Do not hesitate to knock on the doors!

Alittle further on the street Dar el Jeld, on the right, there is an art gallery, the Medina gallery. The gallery has taken place in the ali (guest floor) of Dar Bouderbala. Here you can admire works of art by Tunisian artists in a beautiful setting, articulated around a central covered patio.

Then turn back to Dar el Jeld and turn left into the passage called the Driba, a private passage at the time. At the top of this passage, on the right, you enter by following a long corridor into the patio of Dar Daouletli (16th century house). This house is nowadays the headquarters of the Rachidia, a cultural and artistic association specialized in Tunisian music.

This house would have been assigned in the middle of the XVIIth century to the daouletli, in charge of watching over the security of the Medina. One finds there in a usual way, an entrance in corridor and chicane (driba and skifa). Be careful, the historical entrance is not the current one but the one now condemned located below. The courtyard (patio with porticoes) is surrounded by galleries, apartments, communal areas and stores. This house, given the role of its tenant, housed 3 prisons, for men, women and slaves.

On exiting, turn right towards the passage that leads to the street Sidi Ben Arous. Then turn left into this street.

The first house on the left (at n°56), Dar Hamouda Pacha, or Dar Chahed, is the second good address concerning traditional Tunisian cuisine. The cuisine there is less refined than at Dar el Jeld to my taste, but the setting is more authentic. Princely residence built in the seventeenth century by Hamouda Pasha, 2nd bey of the Mouradite dynasty, sovereign builder also at the origin of the nearby mosque bearing his name and that we will see at the end of the tour. The main courtyard of this palace is undoubtedly one of the most beautiful in the Medina. A visit is a must!

It is an ancient medersa (Koranic school) built by the sovereign Ali 1st Pasha in the middle of the 18th century. As in other medersas, the space includes a courtyard lined with porticoes with black and white painted arches. Under the arches are open rooms to accommodate students (patio visible from the terrace of Dar Announ visited just before). The teaching at the renowned Zitouna Great Mosque attracted students from all over the Muslim world. The dimensions of this medersa meet these needs with a spacious courtyard and more monastic cell rooms than usual. You can see the prayer room in the background.

Leaving the medersa, continue left on rue du Pacha. 500m further down, on the left, you are in front of another very beautiful Tunisian house. It is Dar Ben Achour (52, rue du Pacha), currently occupied by a local library. In this house, you will find the classic plan of construction and layout of the rooms: entrance rooms in chicane, central patio with well (bir) and cistern (majen), gallery, rooms and apartments arranged on the four sides of the patio. Upstairs, a beautiful gallery dominates the patio.

Before the fountain of Bab Souika, turn right under the archway, this is the entrance to the souk Sidi Merhez. It is the street Sidi Merhez. This very colorful and busy souk is specialized in particular in the sale of fabric. After 500m of walking in this alley, a vaulted passage opens on the left and leads to the mausoleum of Sidi Merhez.

Go back and continue on the street Sidi Mehrez, you then pass in front of the entrance of the mosque of the same name. Its Ottoman style is visible and recognizable from afar (but not up close!) by its white domes. It is even the only Tunisian mosque that derives from a Turkish prototype.

Return to the hotel.

NB: The tour includes lunch in an original restaurant in the Medina. The price is quoted on the basis of 20 people.

Plan your trip in advance - book this tour now! 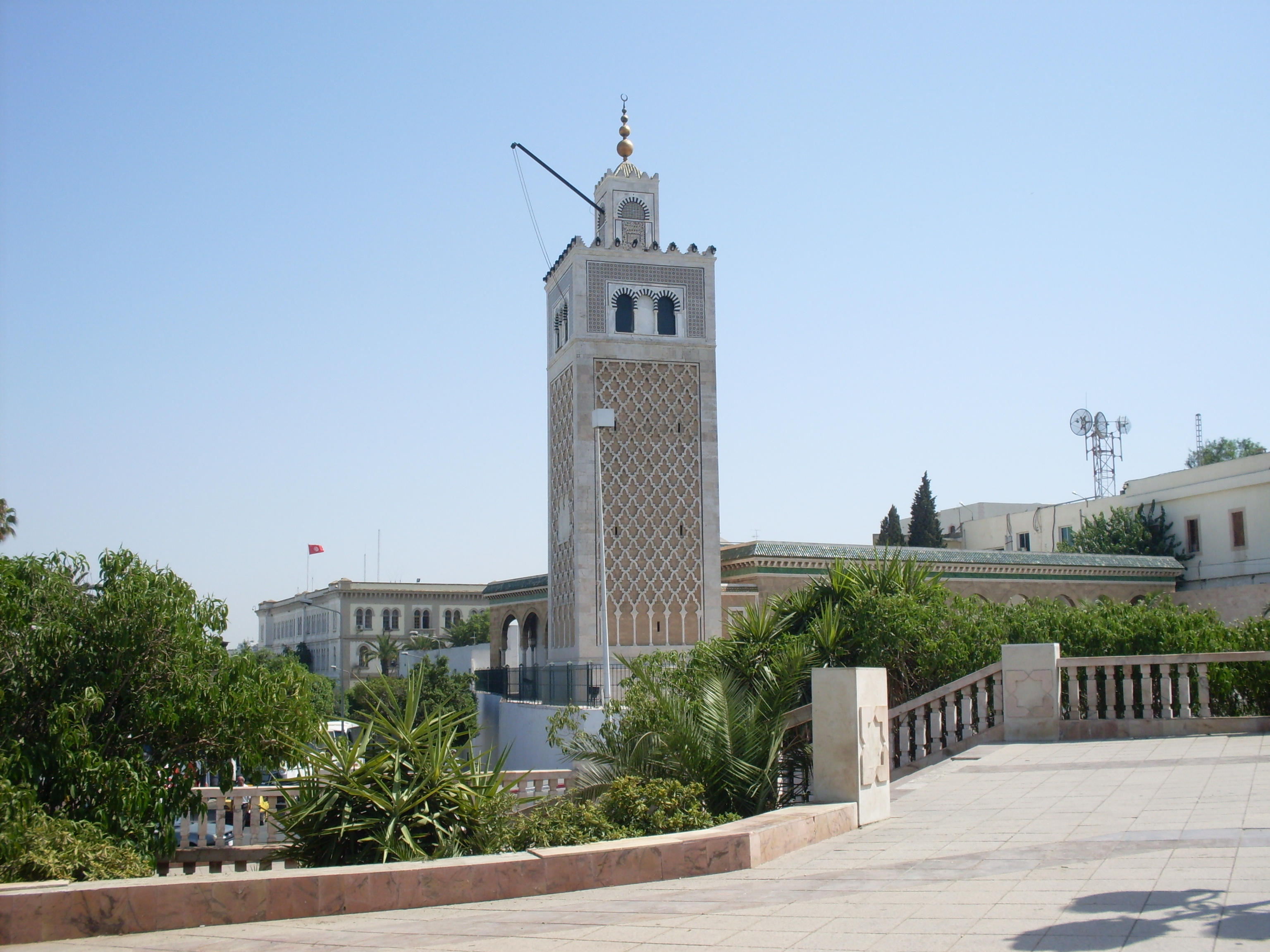 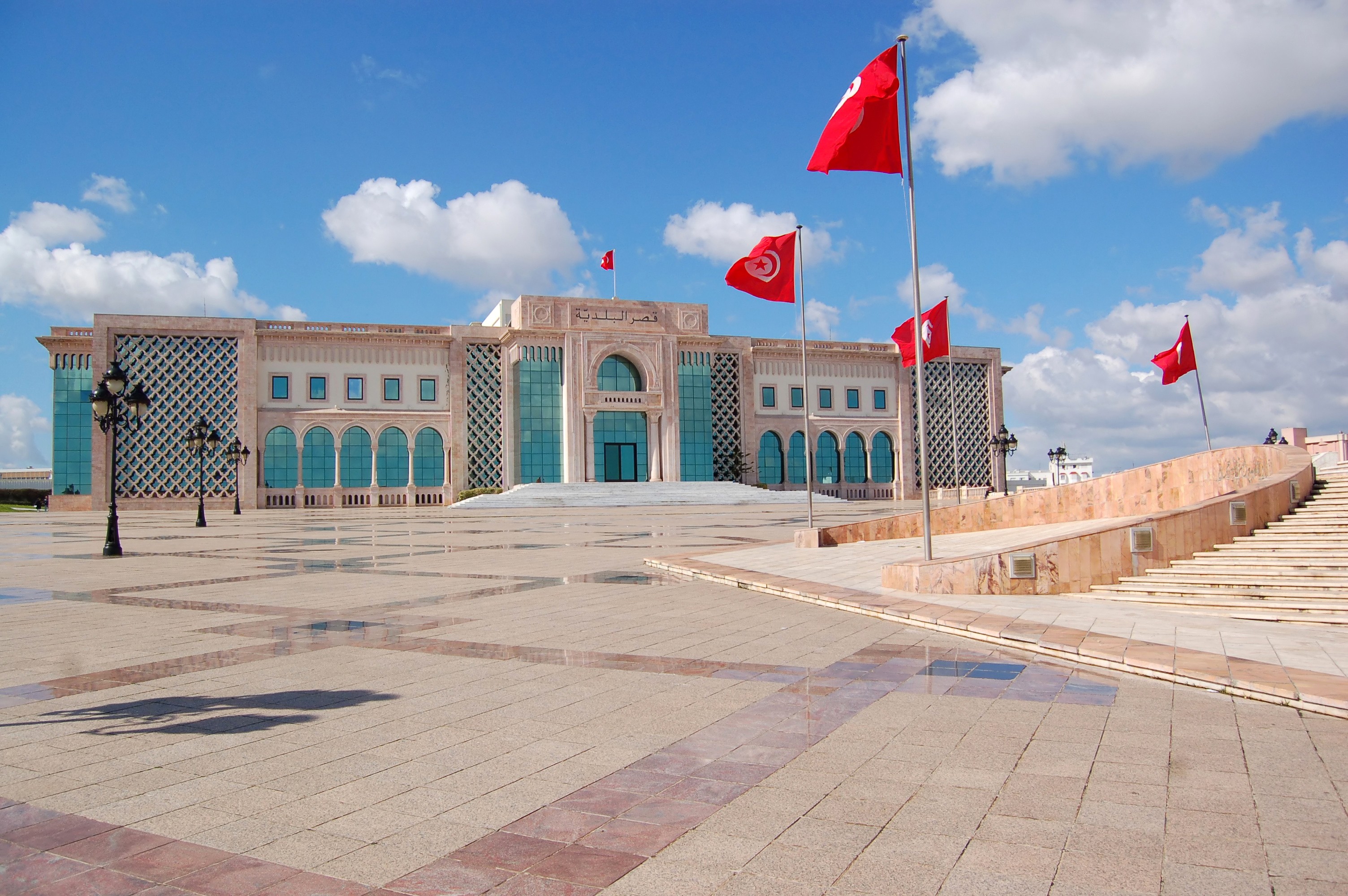 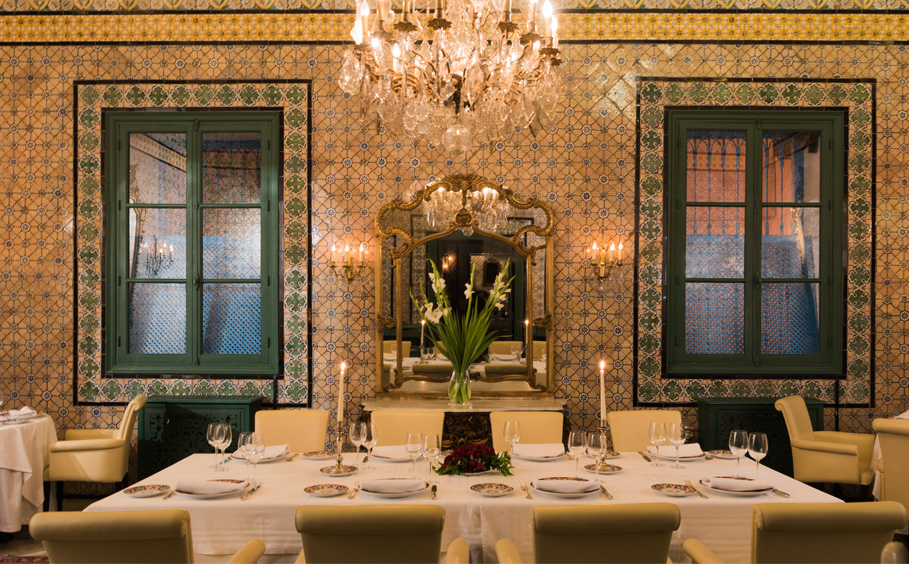 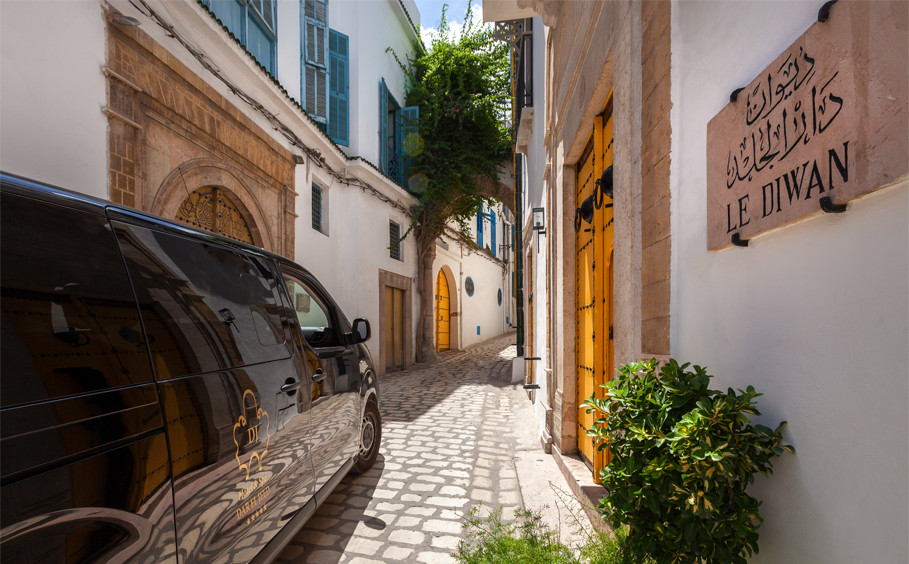 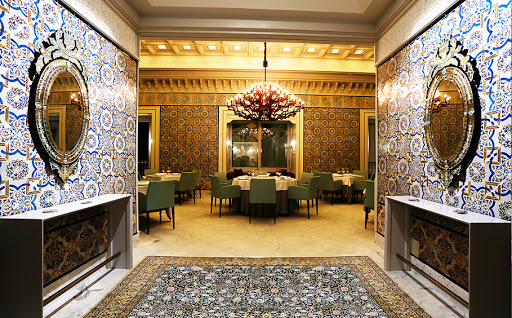 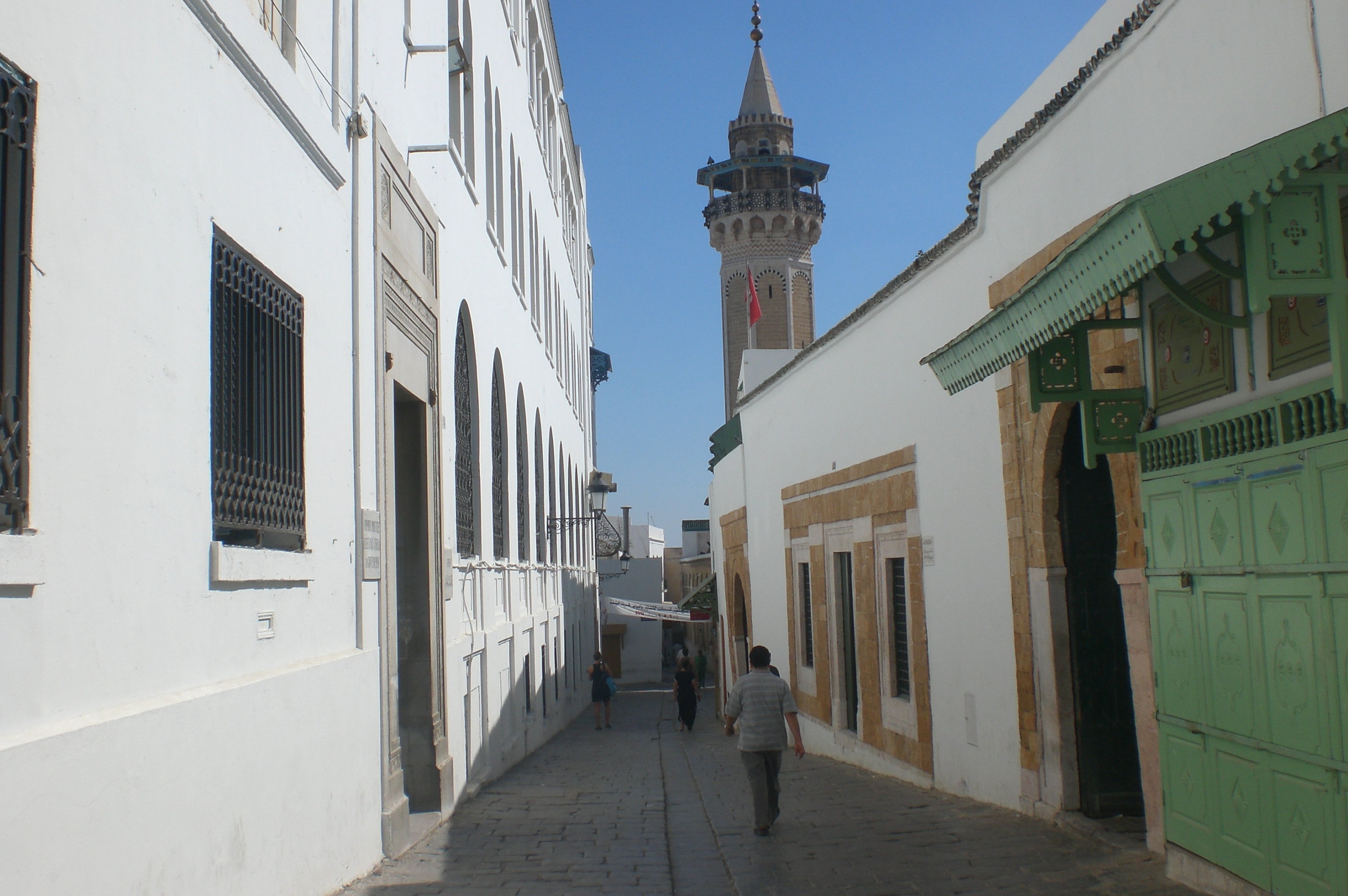 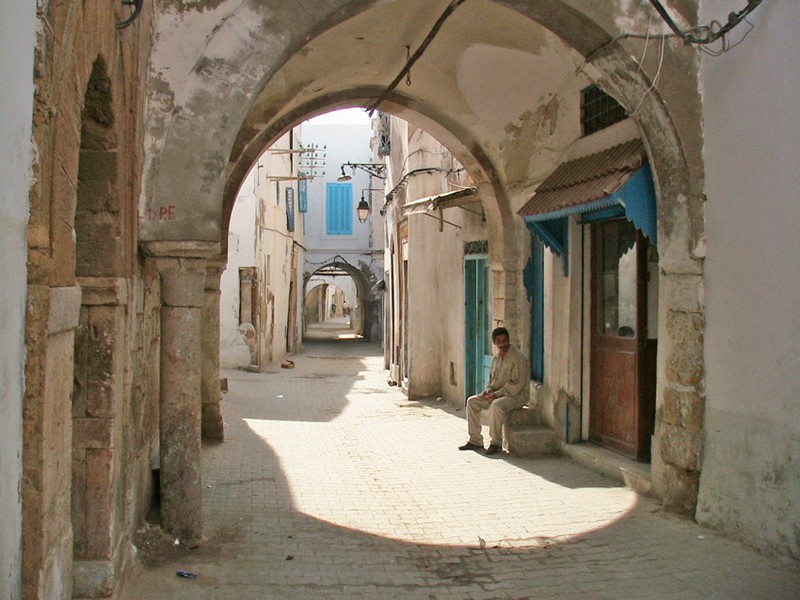 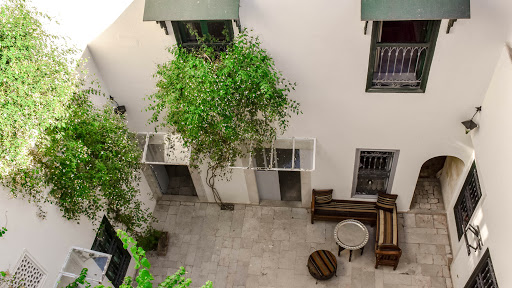 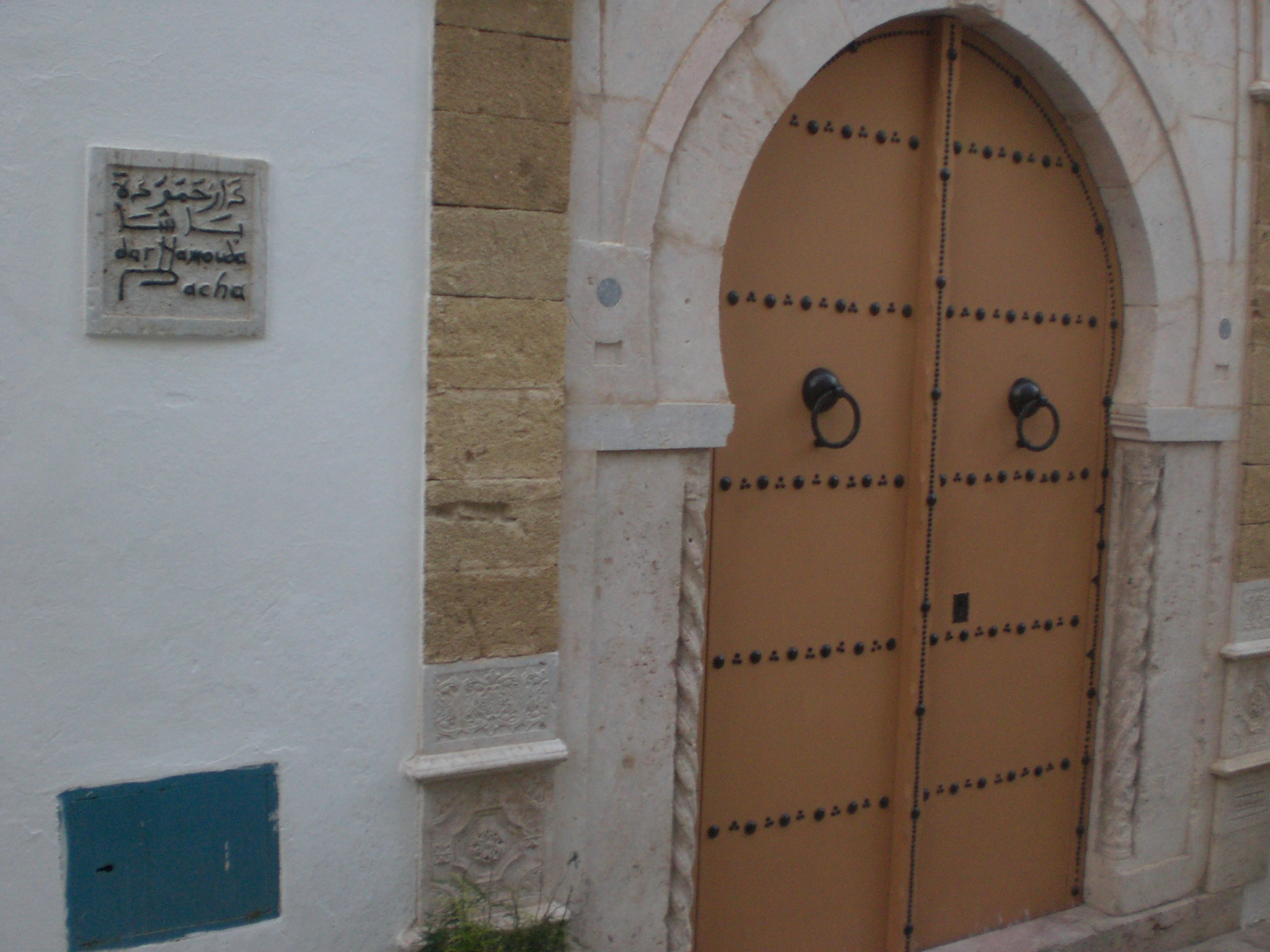 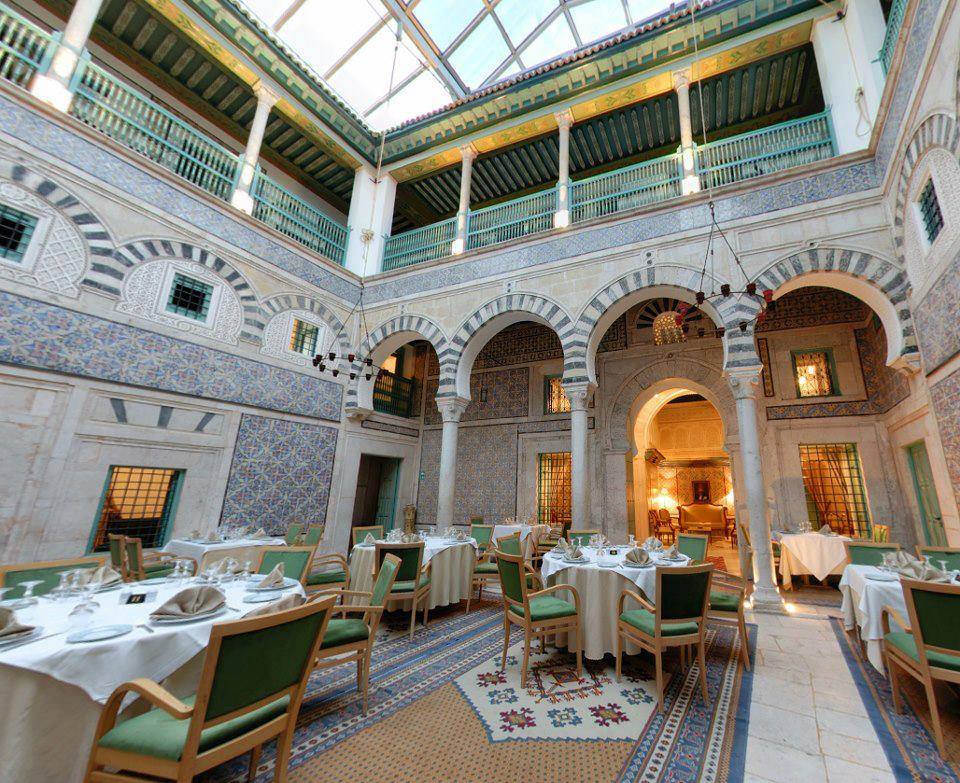 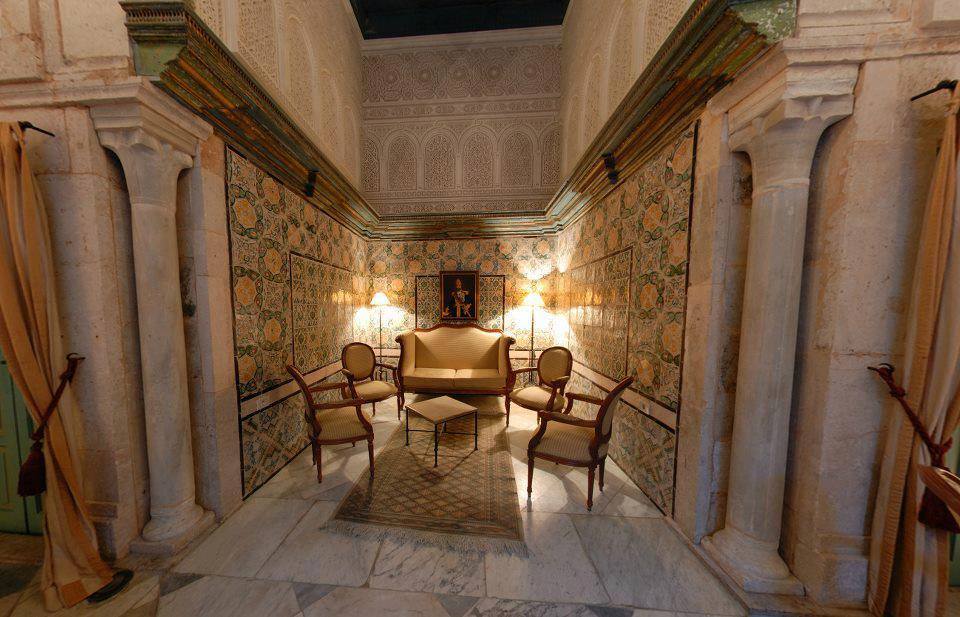 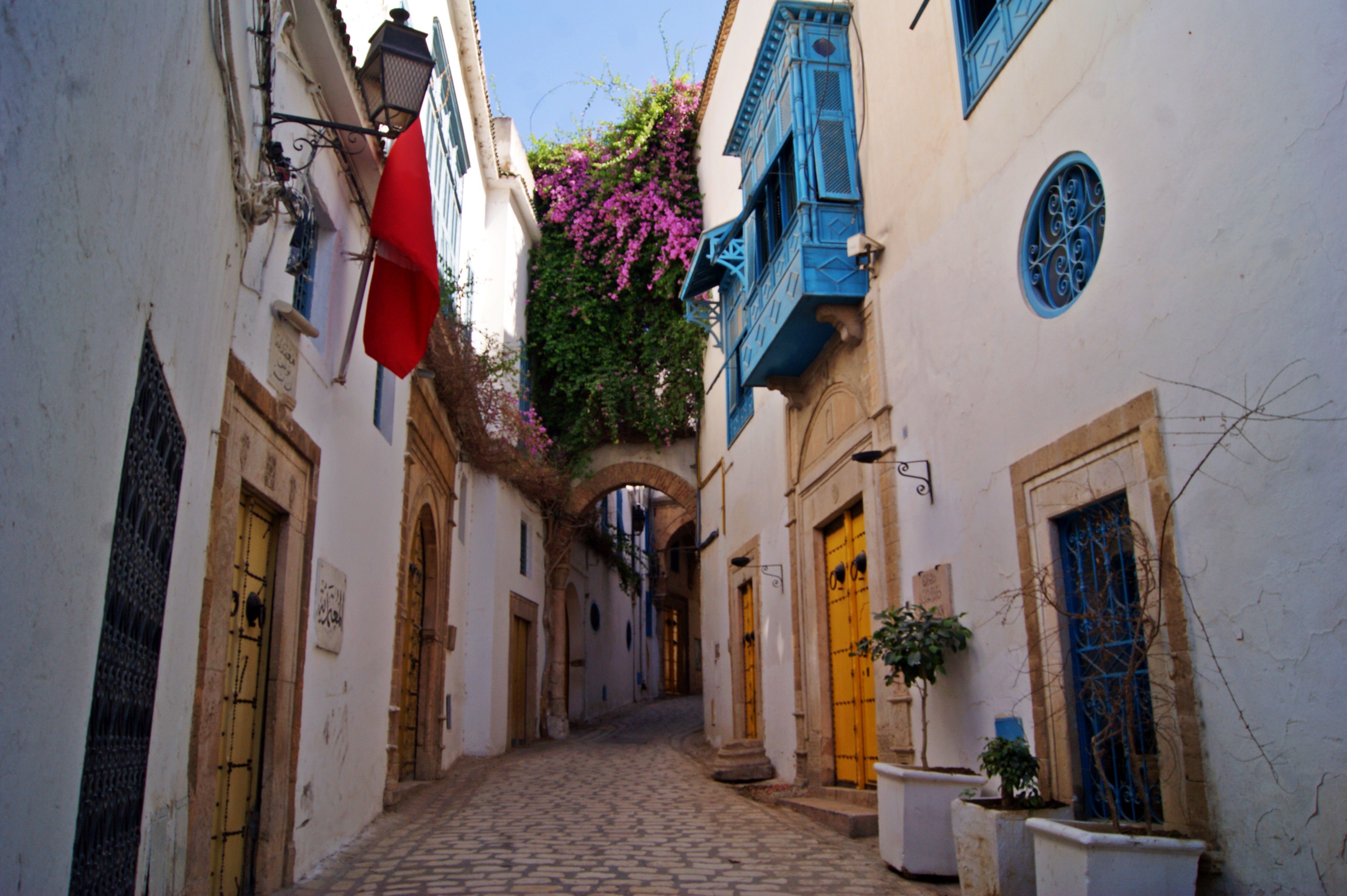 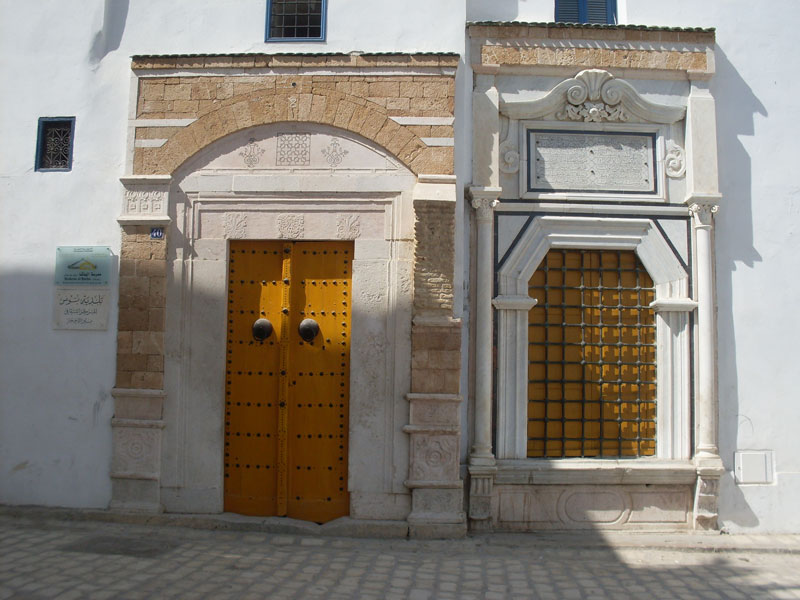 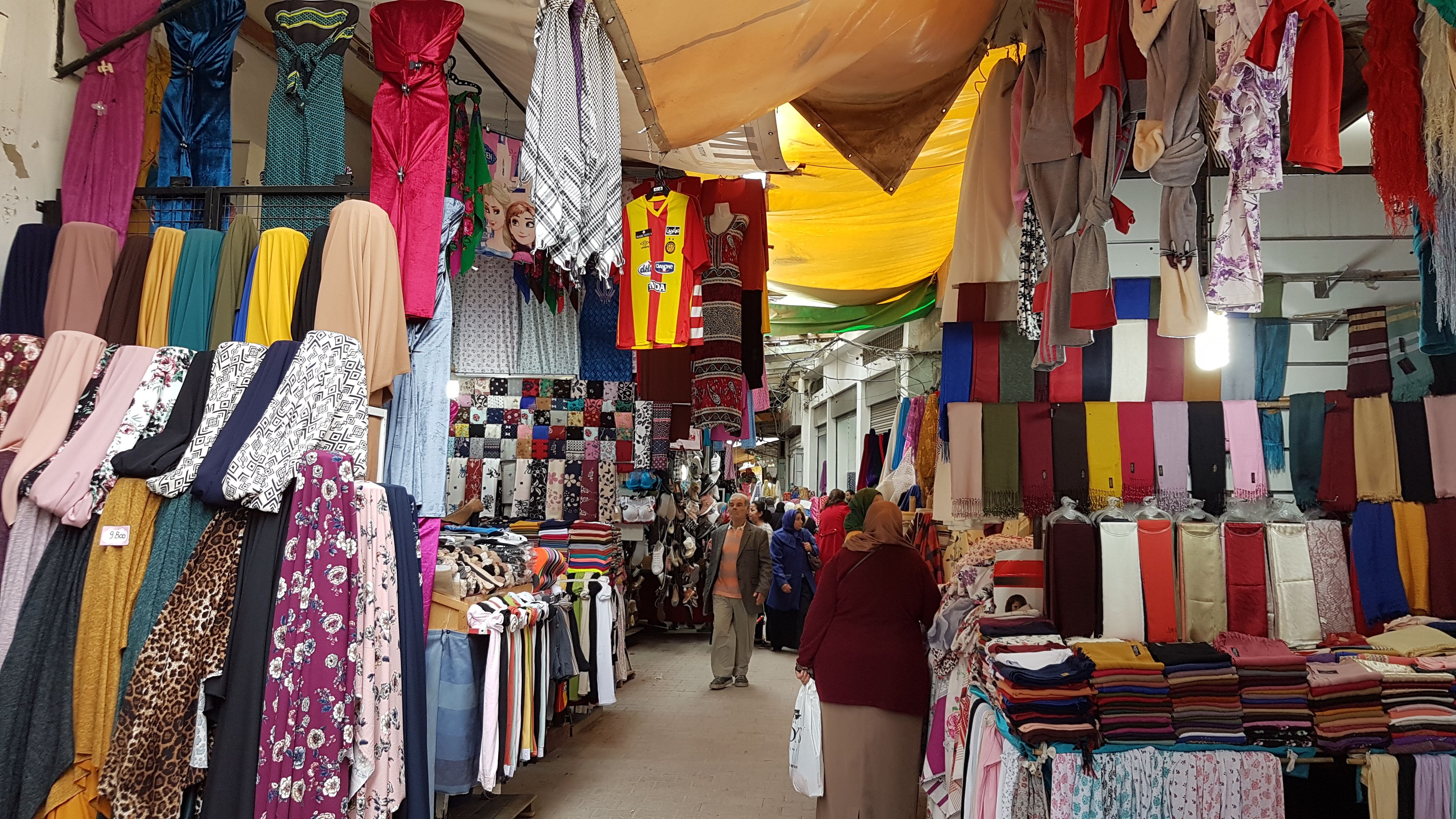 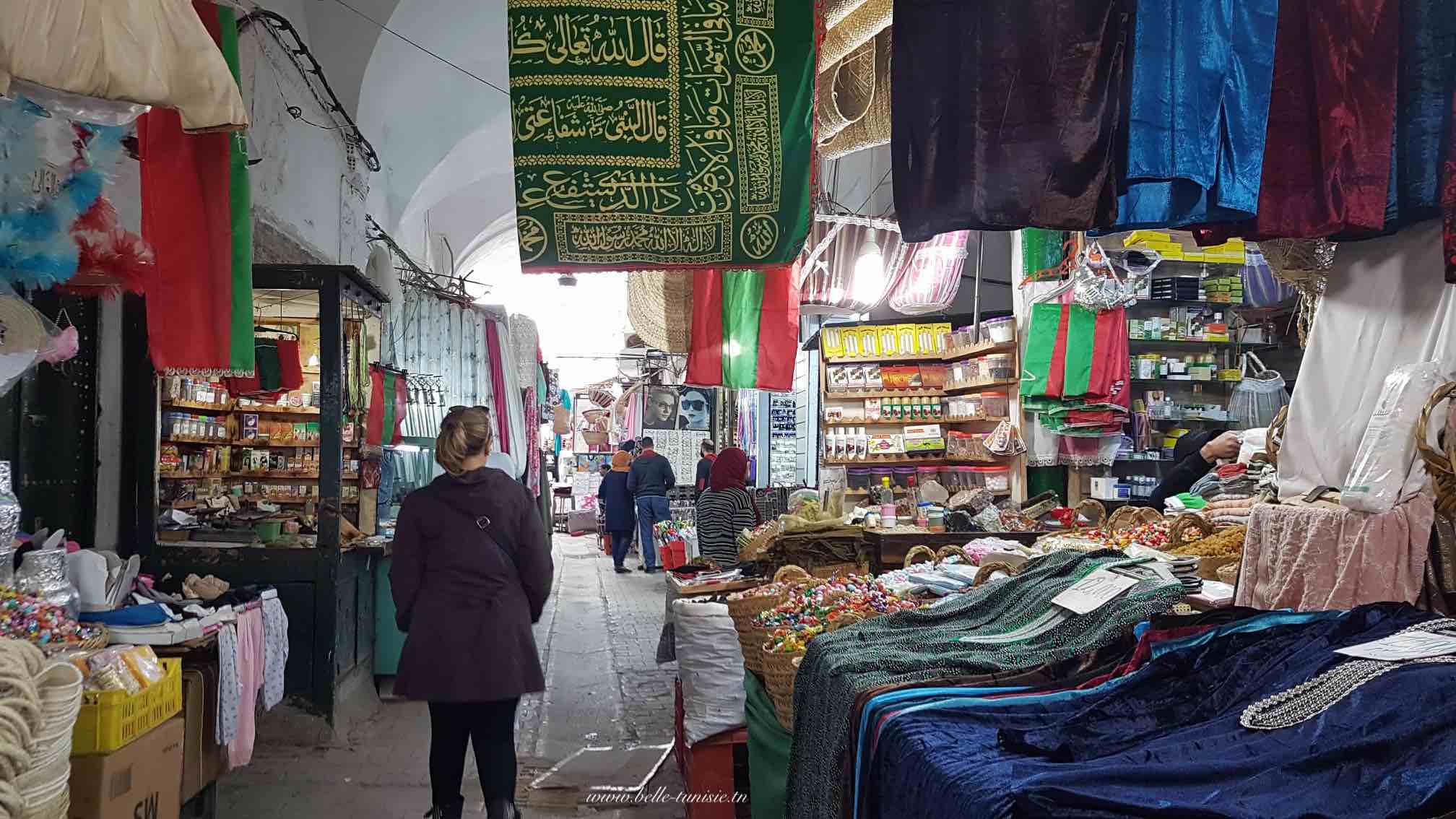 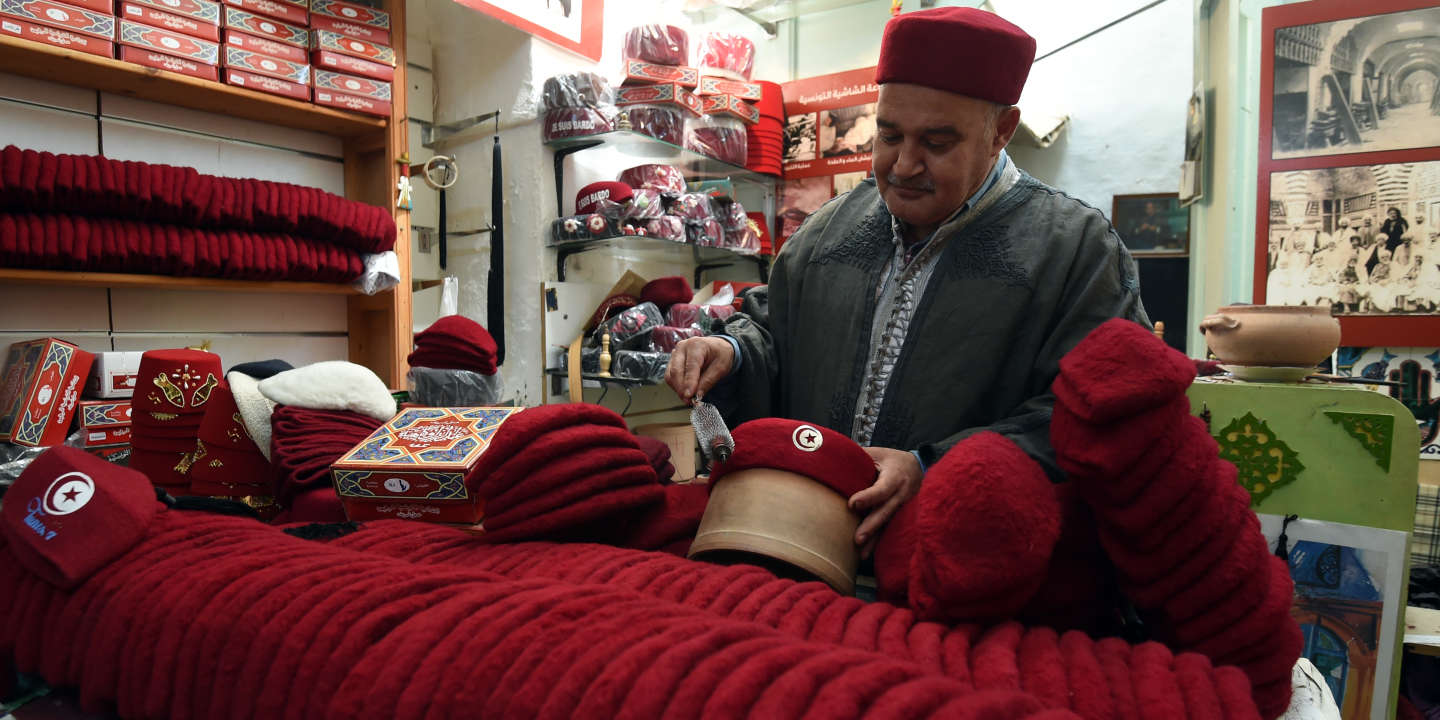 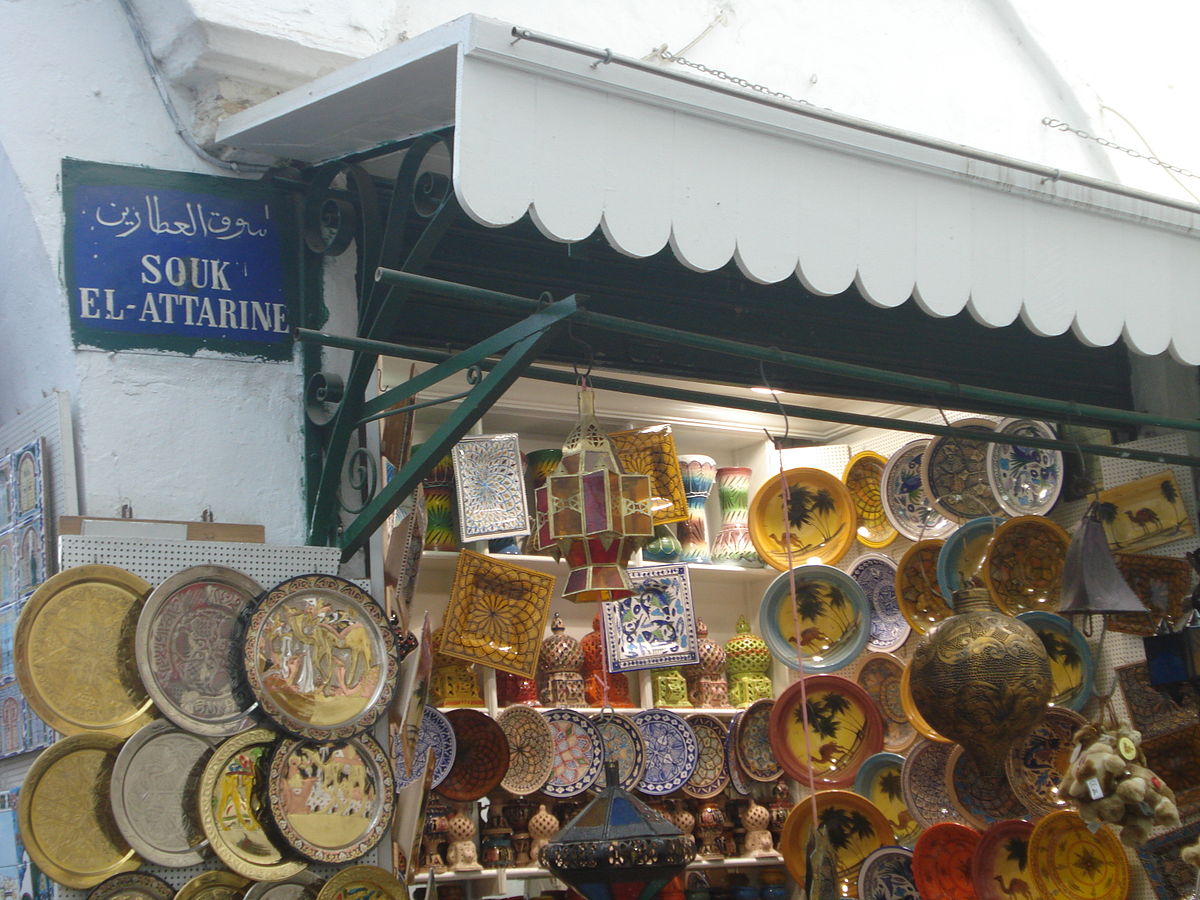 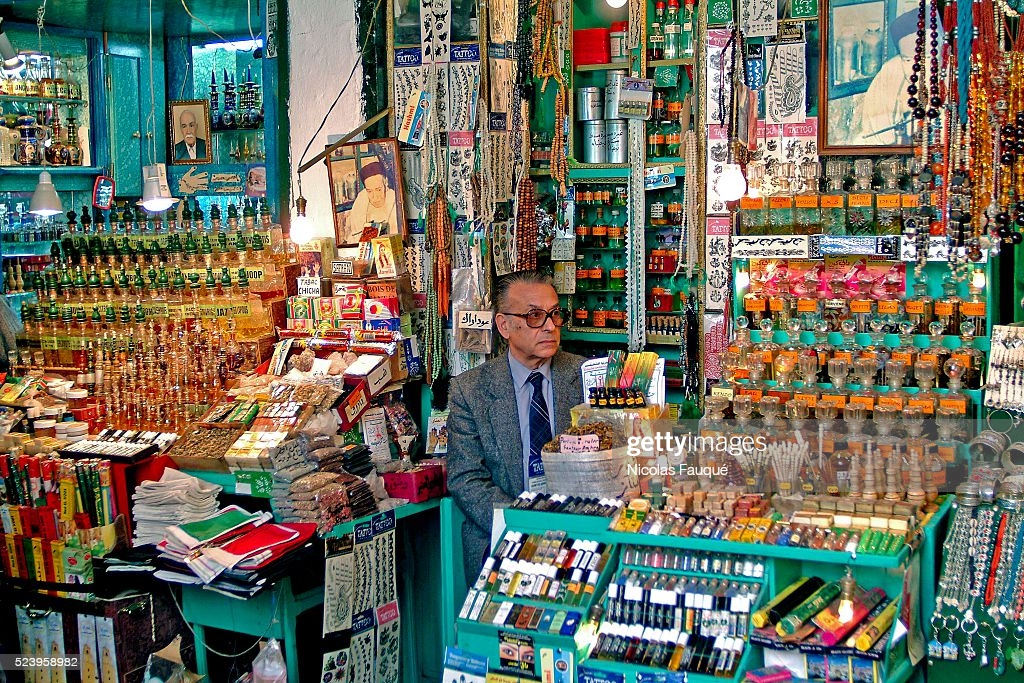 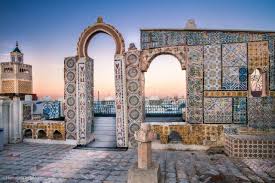